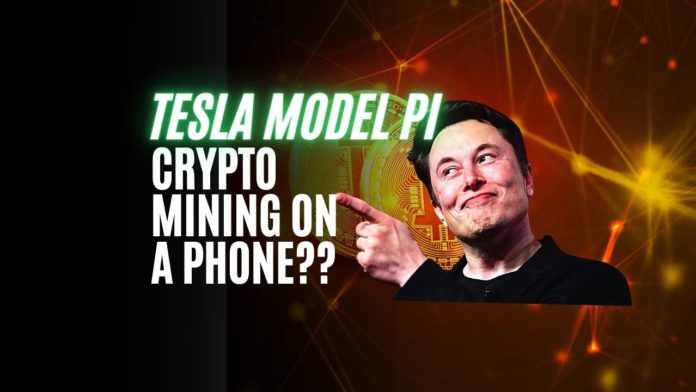 Paypal. Tesla. Space X. Dogecoin. It seems like everything Elon Musk touches turns into money and better tech for people to use in their everyday lives. When he talks, people listen. But somehow, a potentially HUGE announcement from Musk and Tesla came out this week, and no one seemed to notice.

We are talking about the Tesla Model Pi smartphone. Tesla is going to start manufacturing and selling it soon.

Therefore, in this article will review what Tesla will be offering with this new phone and, more importantly, why? Then we will think about the future implications this phone could have for us if we get one.

Why Does Tesla Want to Make and Sell a Smartphone?

Tesla has always said that it is an automotive tech company, not just a car company. Its company performance bears this out too. Its stock price and market value dwarf the ‘traditional automakers.’ Tesla’s more than 2x the value of Toyota and almost 10x the value of BMW, as you see in this graphic right here. 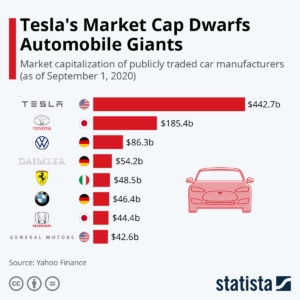 Also, Tesla is bucking the trend of declining auto sales. They are selling more cars during a period of chip supply shortages for the industry. These shortages are preventing traditional carmakers from producing and selling more cars.  Now, why does Tesla want its smartphone if they are doing so well in making cars?

In an interview, Musk himself said that many smartphone software updates present problems for users, whether it be compatibility, speed, and security. Also, as an iPhone user, Musk says each update becomes less impressive for users.

Wouldn’t it be cool if you could communicate from your phone directly to your car about where you want to go? Tesla and Musk see that the goal of a smartphone can become the car’s central controller. Use the phone to communicate with the vehicle, so the car knows what you want to do and how to get you there. So that’s the motivation behind the Model P/Pi phone. Let’s take a look at what it offers.

So, what will this phone have that others don’t? First, one of the iPhones principal designers, Antonio de Rosa, who made a few of Apple’s best features and designs for the iPhone, is now working for Tesla. Here is an introduction video about the Tesla Model PI phone:

Therefore, here are some of its primary design features:

Let’s examine a couple of these features in more detail:

Neural networks here seem a little strange and maybe even a little freaky. But with Neuralink, it’s used as a safety feature to analyze thoughts and possible utterances that aren’t understandable to another person. And this could be life-saving if the reason you can’t talk is that you got into a bad car accident.

It looks like you might be able to use these cameras simultaneously, like one to shoot a pic and another a video or one pic zoomed in close and another at a distance. People will have lots of fun with this feature.

You know that Elon Musk is bullish on colonizing Mars, right? Well, he says the phone will enable crypto mining for Marscoin, the crypto and governance coin behind what settlers on Mars will need. By the way, Marscoin ($MARS) currently trades against USDT or BTC at XT.com and Finexbox. And for those interested, $MARS trades at a little over 6 cents at $0.061

This is a great idea whose time has come. Less time searching for outlets and being able to charge your phone from anywhere.

5. Sync with Other Tesla Devices

Do you know what Starlink is? It’s part of SpaceX. It uses satellites to help provide broadband internet services to rural or other low-density population areas.

And because Tesla wants you to be able to sync to other Tesla devices and not just cars, you may be able to synch with Starlink and download more data into your phone or directly into your car.

Mining Marscoin and using satellite links to mine it may have more implications with the Tesla Model Pi. You may be able to use your phone to mine other PoS and non-energy intensive PoW cryptocurrencies. Also, you could use it without the need for more accounts to stake your favorite crypto.

Imagine your phone and your car communicating back and forth. Your car tells you that you just received a part of a block reward or how much you’ve earned in staking fees.

On the other hand, here are three scenarios we can think of right away that the new Tesla Model Pi Phone will help crypto users:

Almost everyone we know in crypto wants to unbank themselves from the crappy legacy banking system we have in most countries. Then imagine that while you are driving in your Tesla or just out and about with your phone, you don’t need to use the debit or credit card system; you can pay through your Tesla wallet.

There is no need for ApplePay or GooglePay to protect your card numbers from getting out everywhere, or your identity is stolen. Your crypto wallet can pay for it. Or maybe Tesla decides they want to develop a TeslaPay to compete with ApplePay.

And you know, with Tesla and Musk that they would make it fun and easy to use. Probably with rewards points in Marscoin too.

Scenario #2: Contactless Gas and Toll Payments all in One Place

Every car needs fuel from time to time, whether it’s gas, CNG (compressed liquid natural gas), electricity, or Plutonium like the “Back to the Future” car. But, think about it with Tesla:

As you can see, every major toll highway has its system, and many of them are incompatible. This could be contactless too. Instead of having your data and payment information out there with EZ Pass and five other companies that manage toll systems, a built-in Tesla wallet coordinating between your car and your phone can pay it and go.

With mining, payments, or even integration of other services like Lightning or crypto debit cards, crypto adoption could skyrocket from where it is now. All these services are available now. Yet, they are fragmented with people using:

What if the Tesla Model Pi integrates just 2 or 3 of these types of services for people?

What if it’s just that much easier to use and integrate crypto services? Because Tesla has its wallet and because they want to.

Crypto use and adoption would skyrocket among the retail community. That’s everyday people using it in one way or another.

Join us on Telegram to receive free trading signals.