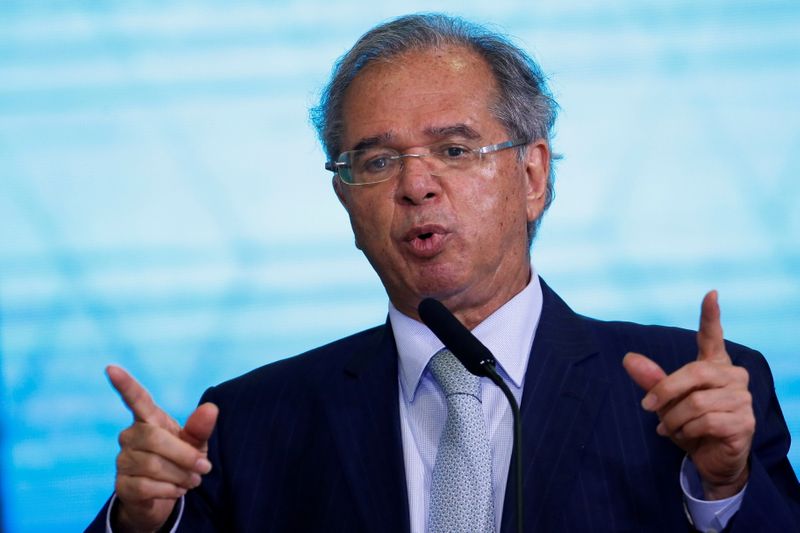 RIO DE JANEIRO (Reuters) – Brazil’s Economy Minister Paulo Guedes on Friday said markets are underestimating the country’s growth potential, adding that he expects the economy to grow by more than 5% this year and by at least 1% in 2022.

Guedes rejected criticism by The Economist this week that he was backing the government’s attempt to bypass a constitutional spending cap that was crucial in righting Brazil’s finances.

“The Economist should look at its own navel. Brazil is better than the big economies, particularly the United Kingdom,” he said, referencing the country that headquarters the magazine.

Guedes ironized: “The one that must be doing well is England. There are lines there to get buy a car, a shortage of meat, and the GDP dropped by 9.7% while we fell by 4%,” he said.

The Brazilian central bank’s Focus survey of economists, which is seen as an indicator of market sentiments, reduced growth expectations for next year to 1% from 1.2%. Some financial analysts are already forecasting growth at close to zero, warning there is a risk of stagflation, or sustained inflation with slow growth.

“They continue to underestimate Brazil. They underestimated when we went down, and I think they will be mistaken again,” Guedes told Reuters on Friday in a telephone interview.

He said Latin America’s largest economy has a solid base, despite the coronavirus-induced economic shock that cause record unemployment.

“Fiscal fundamentals are very strong and the central bank is chasing inflation,” he said. In October, the consumer price index rose 1.25%, the biggest monthly rise since 2002 speeding up annual inflation to 10.67%.

Guedes stated that, despite the pandemic, the country is generating massive investments, such as those committed by private companies in the 5G spectrum telecoms auction last week.