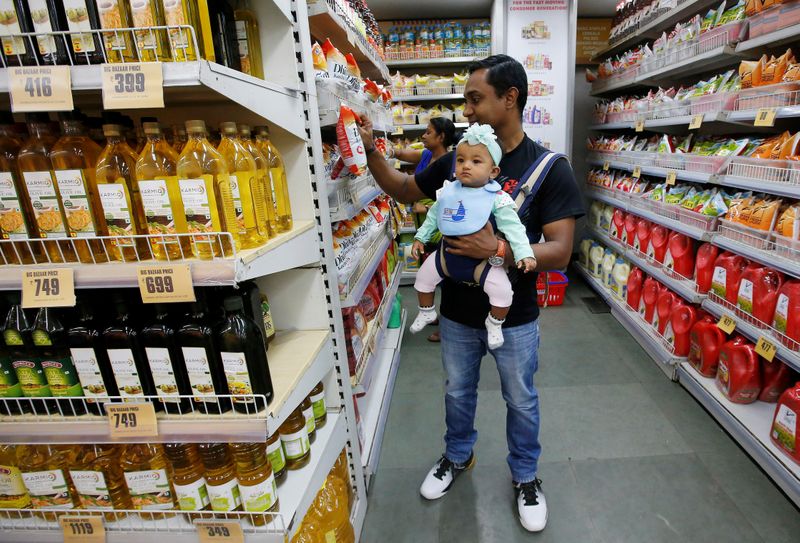 © Reuters. FILE PHOTO: A customer carries his daughter as he buys goods at a store inside a shopping mall in Kolkata, India, June 20, 2018. REUTERS/Rupak De Chowdhuri

BENGALURU (Reuters) – India’s retail inflation likely hovered near a six-month low in October as higher food and fuel prices were offset by an overall favourable comparison with prices one year ago, leaving the central bank room for now to leave interest rates steady.

The median forecast from Reuters poll of 43 economists taken Nov. 8-9 predicted inflation as measured by the consumer price index (CPI) edged down to 4.32% from 4.35% in September.

If realised, it would mark the fourth consecutive month inflation has been within the Reserve Bank of India’s (RBI) tolerance band of 2%-6%. The report will be released at 1200 GMT on Nov. 12.

But poll respondents again highlighted inflation was subdued mainly because of comparisons with a stronger period one year ago, and the current mild trend is expected to continue only for a few more months.

Still, the October inflation data will be the last before the RBI’s rate-setting panel meets Dec. 6-8, where it is widely expected to leave the repo rate unchanged at 4.00%.

The RBI is expected to first raise its reverse repo rate by 25 basis points in January-March, followed by a 25 basis point rise in the repo rate to 4.25% in the April-June quarter, according to a separate Reuters poll.

“This trend is likely to continue for the next two months, supported by a favourable base, the recent reduction in excise duties, and some moderation in the global energy crisis recently.”