With many uninspired by the offering of the Big Three parties, the dark horse on this Election Day may be the smaller party bloc, writes Mike Law. Watch out for the performance of ActionSA in Gauteng, GOOD in the Western Cape, and AIM in Nelson Mandela Bay.

When the results of the last local government elections (LGE) began to hit home after the night of 3 August 2016, a very real sense of shock and panic could be discerned between the walls of the ANC’s Luthuli House headquarters.

From its glorious peak of 69,7% in 2004, the ruling party fell to just a few percentage points above the 50% mark, and had now lost control of most of South Africa’s major cities.

At the same time, Mmusi Maimane had led the DA to its best-ever result: just under 27%. The EFF had increased its vote by roughly a third. Perhaps the ANC wouldn’t “govern until Jesus returns” after all.

Much has changed since that watershed election. Zuma is gone, as are some of his most maligned friends, and President Ramaphosa has brought the ANC some electoral stability. Maimane has also gone – in quite acrimonious fashion – and the DA has set itself on a new course (or perhaps, a return to the old). But the EFF’s gradual yet consistent growth has not abated.

What will happen this time around?

It would be a fool’s errand to venture any firm prediction on the day that South Africans go to the polls, especially in an election as uncertain as this.

Of course, the ‘popular vote’ (the national percentages) is not strictly relevant in this election. It can also be misleading: as parties pick their battles a bit more selectively in an LGE.

But the popular vote remains of great interest to pundits, given that is likely the best tool available to pick up national trends between the national general elections held every five years.

With the strategic parameters in mind, perhaps a better question to ask rather than “who will win” is to ask what would be considered as a win for each of South Africa’s three largest political parties. What are their goals and targets going into this Election Day, against which they will internally measure their own success, and the success of their leaders?

What would be a win for the ANC? After the 2019 national general elections, the ANC would have been looking up rather than down. The electoral rot had been stopped and a popular president was at the helm, with an encouraging agenda for reform.

Politically, at least, Ramaphosa has achieved more than most give him credit for. He has consolidated power away from the Zuma faction, improved the leadership at several marquee institutions and has returned some sense of credibility to the Office of the Presidency.

But those political gains have largely failed to translate into governance outcomes, especially with key metrics such as energy security and corruption.

In light of these shortcomings, the July unrest and a failure to rationalise the executive, significant growth in this election may no longer be a realistic prospect for the ANC in 2021.

Instead, holding firm could be its best outcome. While the ANC might have a sniff in the City of Johannesburg, recovering the metros that they lost in 2016 is probably asking too much, and not letting them slip away completely (i.e., to a DA majority) will be a result in itself.

But for a satisfactory outcome, the ANC will need to hold its majority in eThekwini – arguably the most interesting of all battlegrounds on this Election Day.

Would a poor ANC performance open Ramaphosa up to a contest at the ANC’s 2022 National Electoral Conference?

This would still seem unlikely, as a contest would presuppose a viable challenger to his power, and none appears to be in any imminent threat of emerging. Of course, leaders are judged primarily on their electoral performance, but the sober minds in the ANC still know that Ramaphosa is more popular than the party, and its greatest electoral asset.

What would be a win for the DA? 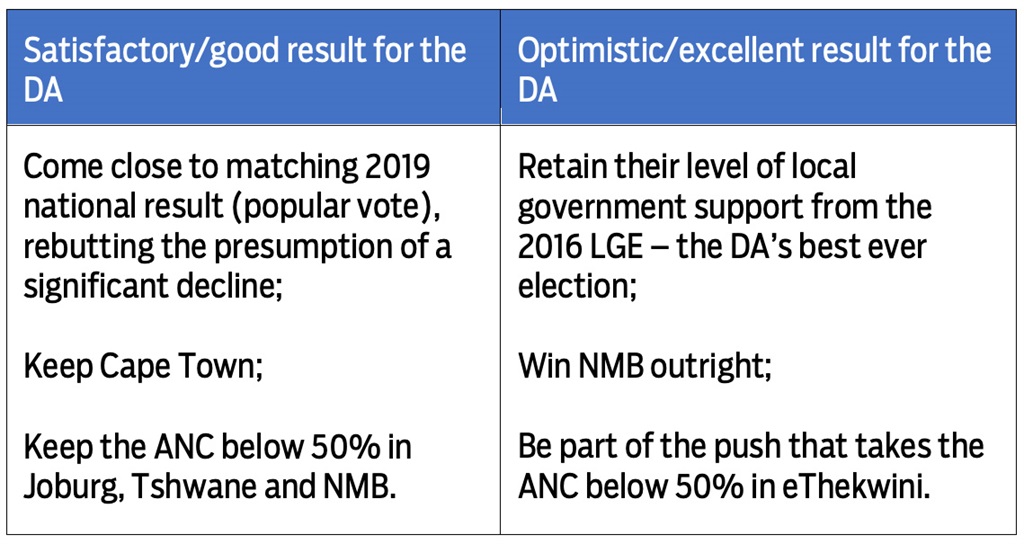 Much like the ANC, the DA will be delighted to just not go backwards in this election, given the procession of PR disasters that seem to have followed the party since the last vote.

Internally, the DA has likely resigned itself to the fact that the party’s popularity has declined since Maimane’s departure. But reduced popularity does not always translate into the same scale of electoral decline. This is because in all elections, but especially in LGEs where turnout is more sporadic, the game is more of a turnout battle than a popularity contest. The DA’s ‘turnout game’ is generally strong, a trend that is likely to continue in this election, somewhat saving some of their blushes.

The number 1 priority metro for the DA will be Nelson Mandela Bay, given how close it was to achieving a majority there in 2016, and the result will be an important yardstick of its success.

A bad DA result in this election could cause more trouble for Steenhuisen than a bad ANC result would cause Ramaphosa.

The internal rebellion against Maimane ultimately ‘hung’ the former leader on an electoral decline in 2019. Given the high bar set by Maimane’s results, this reasoning could come back to bite Steenhuisen if the DA suffers the electoral decline that many are predicting.

Add to that Steenhuisen’s failure to impress his brand awareness and favourability on voters, and the hunter could become the hunted – although Steenhuisen will feel that he has more support from the ‘higher ups’ than Maimane ever enjoyed.

What would be a win for the EFF?

Further growth for the EFF is expected, as they have achieved steadily in all the elections that they have contested.

While the metros are the focus, the balance of votes between the ANC and EFF in rural areas will be particularly interesting for longer-term trends going into 2024.

The EFF is making a big push in eThekwini, arguably its highest priority metro. Beyond that, the EFF’s next goal must be to show that it can win municipalities, something that it has yet failed to do. Whether or not that would be a good thing for the EFF is doubtful. While it is true of many political parties, the EFF has the hallmarks of a party much better suited to opposition than government.

But, exponential growth will make it harder yet to dismiss the EFF as a harmless short-term craze.

With many uninspired by the offering of the Big Three parties, the dark horse on this Election Day may be the smaller party bloc. Watch out for the performance of ActionSA in Gauteng, GOOD in the Western Cape, and AIM in Nelson Mandela Bay.

Either way, the result of this election is likely to be more rocky coalitions, and will be determined as much by the electorate as it will by the negotiations that political parties are having behind closed doors.

– Mike Law is an independent political strategic advisor, senior researcher at the Paternoster Group, and co-convenor of the initiative: Political Party Cooperation and the Building and Sustaining of Coalitions.

Disclaimer: News24 encourages freedom of speech and the expression of diverse views. The views of columnists published on News24 are therefore their own and do not necessarily represent the views of News24.