Says, the “Centre for Bio-resources and Sustainable Development” will help in uplifting the socio-economic status of tribal people in the State

The Biotech Centre covering 4 districts and over 50 villages will benefit over 10,000 farmers in next 2 years: Dr Jitendra Singh

Union Minister of State (Independent Charge) Science & Technology; Minister of State (Independent Charge) Earth Sciences; MoS PMO, Personnel, Public Grievances, Pensions, Atomic Energy and Space, Dr Jitendra Singh today inaugurated a new Biotechnology Centre for Northeast tribals in remote area of Arunachal Pradesh at Kimin. He said, the “Centre for Bio-resources and Sustainable Development” will greatly help in improving the socio-economic status of tribal people in the State. The Centre aims at conservation and sustainable utilization of the local bio-resources using biotechnological tools and is ably supported by Department of Biotechnology, Ministry of Science and Technology, the Minister added. 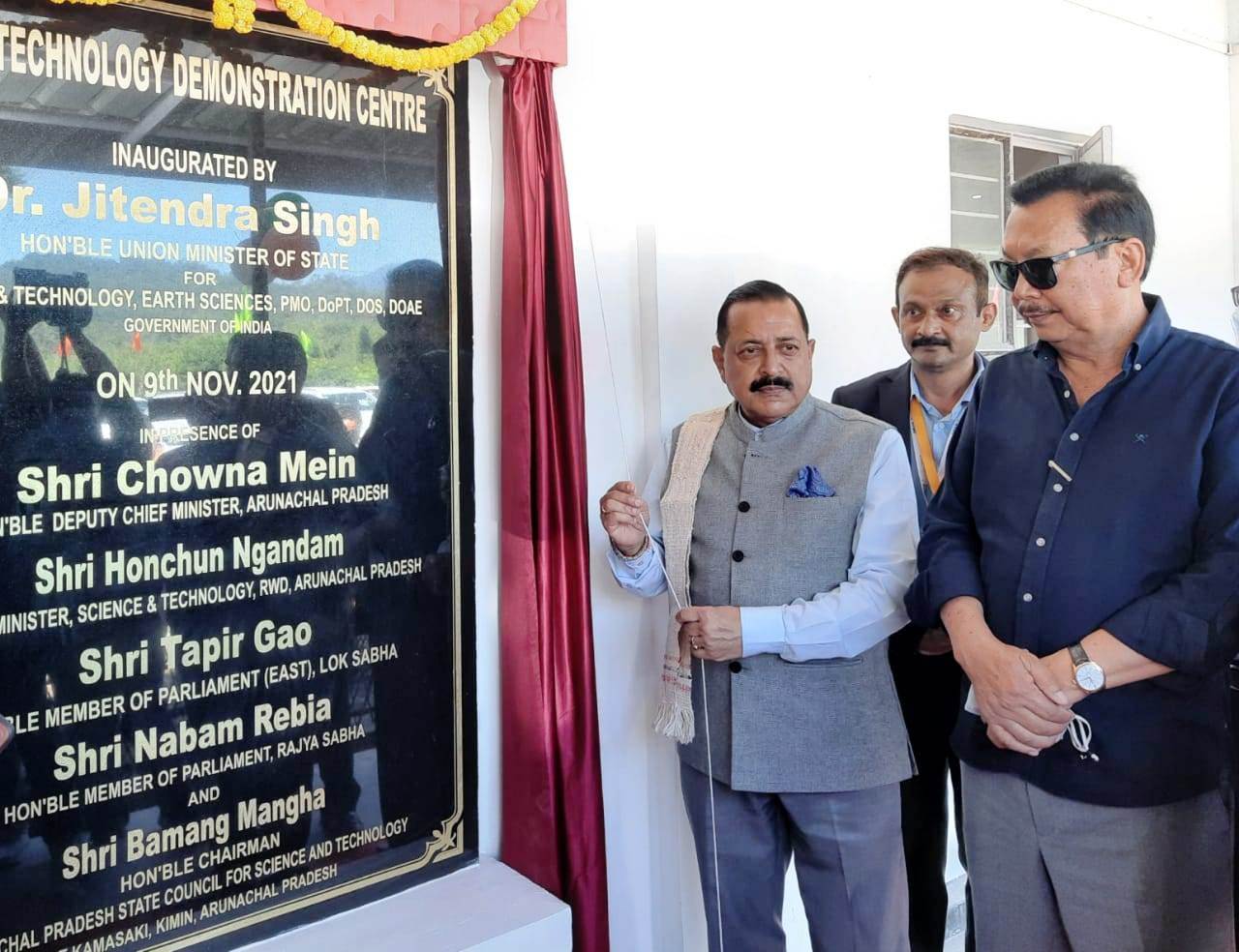 Dr Jitendra Singh said, ever since Narendra Modi took over as Prime Minister, he has accorded a special priority to the development of the North Eastern region of India and also to the upliftment of tribals. He said, in the last seven years, significant steps have been taken in areas like agriculture, hydel-power, infrastructure, information and communication technology, tourism as well as in creating new avenues of growth through the development of vertically integrated food processing chains, marketing the skill development and cross-border trade.

The Minister also underlined that the Department of Biotechnology has played a pivotal role to build capacity in the region for carrying out biotechnology research to address issues specific to the region and implement programmes for the societal upliftment of the local communities. Dr Jitendra Singh said that the “The Centre for Bioresourcesand Sustainable Development” has also established academic linkages with several ICAR, CSIR Institutions, for efficient implementation of these programmes as they will create employment opportunities for the prospective young entrepreneurs of the state of Arunachal Pradesh. The facilities for the implementation of these programmes will be established in 4 districts of Arunachal Pradesh covering over 50 villages and benefit over 10,000 farmers in next 2 years.

The Minister said, the Centre is focusing on the implementation of following three major programs for benefit of the region.(i)  State-of-the-Art Orchidarium in the main Centre at Kiminfor conservation and multiplication of priority orchid species along with establishing satellite units in selected districts of Arunachal Pradesh, (ii)  Establishment of banana fibre extraction and processing units in selected districts of Arunachal Pradesh, and (iii) Establishment of Aroma Unit for promotion of cultivation of aromatic crops and entrepreneurship development.

The Minister informed that for the scientific upliftment of the region, “The Centre for Bioresources and Sustainable Development”, has been established at Kimin, Papum Pare district, Arunachal Pradesh by the State Council for Science and Technology, Department of Science & Technology, Government of Arunachal Pradesh with the support of Department of Biotechnology, GoI. The Centre was sanctioned on 27th March, 2018, at a total sanction of Rs 54.23 Crores initially for a period of 3 years. The tenure of the project has now been extended till 26th September 2023.

Dr Jitendra Singh also dedicated DBT funded Skill VigyanProgram in Biotechnology to the state of Arunachal Pradesh during the event. The Minister said, the program is under the purview of Skill India Mission through which the DBT makes alignment with Skill Development Councils of Ministry of Skill Development and Entrepreneurship (MSDE) and various Partnering Institutions towards handholding of this program. Dr Jitendra Singh informed that the program is the focused endeavor towards building synergies with Skill Vigyan and Accelerate Vigyan initiatives of Govt. of India as it aims at facilitating development of career paths for young graduates in Life Sciences/Biotechnology by skilling them through hands on practices for creating quality job opportunities as well as Entrepreneurship Developments including capacity building of young faculty members in the key STI domains.

Three different Skill Development Councils (SDCs) of NSDC-MSDE are as part of these trainings and signed MoUswith APSCS&T to extent their support for implementing the Skill Vigyan Program for the State of Arunachal Pradesh along with various Patterning Institutions.